The music label of K-pop boy band BTS is going public next week, and ahead of that, it's taken deposits from retail investors who want to buy shares.
A record amount of deposits were received... just barely missing the record set last month by Kakao Games.
Demand was overwhelming, as our Min Suk-hyen reports.
Big Hit Entertainment took deposits from retail investors on Monday and Tuesday, receiving about 50-point-2 billion dollars in pre-orders.
The ratio of bids to the number of shares on offer was 607 to one.
That's far higher than pre-orders for SK Biopharmaceuticals in June but not as high as for Kakao Games, which set a new record last month.
Big Hit will debut on the KOSPI next Thursday ...at an initial price of 135-thousand won, or about 115 U.S. dollars per share.
The company plans to sell a total of 7-point-1-3 million shares... of which 60 percent are going to institutional investors, 20 percent to retail investors... and the remaining 20 to the group that represents employees who own shares in the company.
Market watchers say the funds from the IPO will be used to expand the firm's business opportunities.
"Through its IPO, Big Hit Entertainment is expected to raise about 962-point-6 billion won about 830 million dollars. Most of the deposits will be invested in its global community platform 'Weverse' … or used to expand its business through mergers and acquisitions with other entertainment companies."
Investors are clearly motivated by the global success of the company's most high-profile project, BTS.
The seven-member group has made in recent weeks by becoming the first South Korean artist to top the Billboard's Hot 100 singles chart with their latest song 'Dynamite'.
Analysts say the company is showing no signs of slowing down... even in the pandemic.
"The company was able to avoid the blow of the pandemic through revenues generated from online concerts and video content. As a result, Big Hit is expected to see sales grow by 11 percent."
Big Hit founder and CEO Band Si-hyuk has given each member of BTS shares worth about 8 million U.S. dollars. If the price doubles on the first day of trading, their expected to gain even more.
Min Suk-hyen, Arirang News. 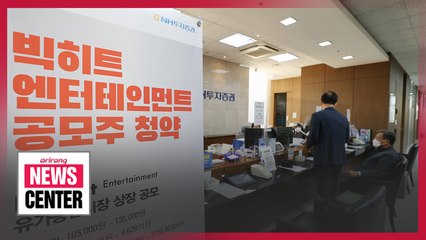 빅히트 일반 청약 마감…증거금 58조, 경쟁률 607대 1The music label of K-pop boy band BTS is going public next week, and ahead of that, it's taken deposits from retail in...